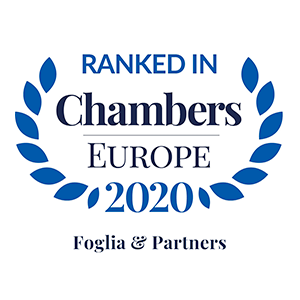 The revenues from the bond issuance will be used to finance the acquisition of 100% of GoldBet S.r.l. share capital. The professionals Giuliano Foglia, Matteo Carfagnini and Marco Poziello worked on the deal.

Foglia & Partners assists Apax in the acquisition of the AEB group

Foglia & Partners assisted Apax Partners in managing the tax profiles of the signing of an agreement with the American fund SK Capital for the 100% acquisition of AEB Group, a global leader in biotechnology ingredients and related services for the food, wine and beverage industries.

Partners Giuliano Foglia and Matteo Carfagnini, together with Marco Poziello, associate, worked on the deal.

Foglia & Partners in the update of Acea's EMTN programme

Foglia & Partners provided assistance in relation to the tax related issues of the EMTN programme update by Acea S.p.A., which involves the issue of Notes for a total maximum value of €3 billion.

Acea S.p.A. is one of the main Italian multi-utility companies, active in the management and development of networks and services in the water, energy and environment sectors. Partners Giuliano Foglia and Matteo Carfagnini, together with associate Marco Poziello, worked on the deal.

Foglia & Partners with Gamenet Group S.p.A. in the acquisition of Goldbet S.r.l.

Foglia & Partners assisted Gamenet Group S.p.A. – company listed on the STAR segment of the Mercato Telematico Azionario of the Italian Stock Exchange - in the tax-related part of the acquisition of the entire shareholding in Goldbet S.r.l., a company operating in the gambling industry, by the subsidiary Gamenet S.p.A.

The value of the acquisition is 265 million euros (enterprise value). The Firm dealt with the tax aspects of the acquisition and of the financing with a team made up of partners Giuliano Foglia and Matteo Carfagnini, assisted by associates Marco Pozziello and Francesco Capogrossi.

Foglia & Partners provided assistance to ICS Maugeri group, specialized in medical services, in the refinancing of its €190 million debt, in relation to tax related issues.

The refinancing will allow ICS Maugeri and the real estate fund IASO - managed by Namira Sgr and 84.1% controlled by ICS Maugeri and by the private equity fund Trilantic for the remaining 15.9% - to optimize the terms and conditions of the credit lines and to support the implementation of their respective multi-year investment plans. Partners Giuliano Foglia and Matteo Carfagnini assisted ICS Maugeri.

Foglia & Partners has been recognized as “Best practice – Litigation” at the fourth edition of Legalcommunity Tax Awards 2018. When deciding to attribute the award to Foglia & Partners, the jury, which included tax directors and CFOs from the main national and international companies, acknowledged the success of the firm in the area of tax litigation.

The award was given to Giuliano Foglia, who said: “We are honoured to receive for the third year in a row an award at Legalcommunity Tax Awards. This important recognition confirms the clients’ appreciation for the quality of our assistance in challenging tax disputes and is a further motivation to continue following the path inaugurated two years ago with the launch of our firm”.

After its launch two years ago, Foglia & Partners is proud to announce the inclusion in Chambers Europe 2018 ranking. Since 1990, Chambers has published the leading directories of law and tax firms around the globe, with a reputation of independence and objectivity.

Foglia & Partners has been ranked in Chambers Europe 2018 for its expertise in a variety of Italian and international tax matters, including M&A, transfer pricing and capital markets-related transactions, and as it offers additional capacity to handle contentious tax matters. Giuliano Foglia has been ranked in Chambers Europe Band 3.
When interviewed by Chambers, Foglia & Partners’ clients acknowledged that:
"They are extremely reliable and have the right approach with the tax authorities"
"The lawyers help us with a tailor-made solution every time", and
"Giuliano Foglia has a very deep knowledge of the Italian fiscal law and has a problem-solving approach"

Foglia & Partners provided assistance for tax related issues to the Italian company Green Network in the bid for the Italian assets of Gas Natural with a team composed by Giuliano Foglia, Matteo Carfagnini and Marco Poziello.

TrustLaw is a program involving the leading law firms in the world advising also the non-profit sector.

Foglia & Partners, tax and legal boutique, announces the appointment of Marco Poziello as associate. Marco will deal with national and international Tax. The appointment takes effect on March 1st.

Before joining Foglia & Partners, Marco Poziello worked at Crowe Howarth as Junior Tax Consultant. Poziello has a Graduation Degree in Law at the Univerisity “Federico II” in Naples and a Master Degree in ‘Tax Law, Accountability and Tax planning’ at ‘LUISS’ University in Rome.

Foglia & Partners advised Gambro Dasco SpA (Baxter Group) in the process to adhere to a transfer pricing procedure. The procedure regards tax periods 2011-2014 and granted the company a significant decrease in the taxable income questioned during the examination by the competent Court.

Gambro Dasco was advised by Foglia & Partners and, in detail, by a team composed of Giualiano Foglia, Duccio Casciani and Matteo Carfagnini.

Foglia & Partners with the partners Giuliano Foglia and Duccio Casciani advised Massimiliano and Doriana Fuksas architecture firm in the litigation for Shenzhen (China) Airport expenses in relation to the design and construction of the Airport Terminal 3.

The Regional Tax Court of Lombardy issued a judgment in favor of the appeal proposed by Baxter World Trade Corporation and its affiliate Bieffe Medital S.p.A. on a transfer pricing litigation case against the Revenue Agency.

Baxter World Trade Corporation and Bieffe Medital were advised by Foglia & Partners with a team composed of the partners Giuliano Foglia and Duccio Casciani.

Foglia & Partners is tax advisor of ACEA S.p.A. in the update of its EMTN program

Foglia & Partners advised ACEA S.p.A. as tax advisor in the update of its EMTN program with issuance of notes for a maximum total value of €1.5 billion.

Foglia & Partners has won the “Boutique of excellence of the Year” award in the category “Tax” at the sixth edition of the international award Le Fonti. Every year, the event gathers the Italian financial community to award professionals and law firms, which stood out for excellence in the services provided and in their successful activities.

The award ceremony took place on the evening of the 9th of June at Borsa Italiana in Milan. Giuliano Foglia and Christian Cisternino, founding partner, were at the Awards ceremony on behalf of the team of Foglia & Partners law firm.
The award “Boutique of excellence of the year – Tax” was bestowed to the firm for the activity focused on tax, financial, real estate and tax litigation aspects and for the specialized approach and the assistance that accompanies the clients in the management of extraordinary operations.
“We are delighted to have won an important recognition such as the International Award Le Fonti. For us, it recognizes that our professionalism and high level of services provided is recognized by clients and by the financial community” – commented Giuliano Foglia and Christian Cisternino when awarded.

Foglia & Partners law firm received the award “Emerging Law Firm of the Year” at the LegalCommunity Tax Awards, among the most important acknowledgements in the Italian tax consulting industry.

The awards ceremony took place on the evening March 22th at the Science and Technology Museum in Milan and Giuliano Foglia together with Christian Cisternino, naming partners, received the award on behalf of the team of the firm, which operates since the 1st of January 2016 and can already count on many mandates.
In motivating the award, approved unanimously, the jury of the LegalCommunity Tax Awards 2016 – which includes a panel of top managers responsible for the Tax practice of Italian and international companies – underlined the recognized professionalism of Foglia & Partners’ team and the impact of the new firm on the tax consulting industry.
“This award is a prestigious recognition for our team” – commented Giuliano Foglia and Christian Cisternino – “We are ready to face the challenges for the industry, which is evolving towards advisory models even more specialized and tailor made to support our clients on all aspects of tax planning”.

Foglia & Partners, tax and legal consulting firm, operational since 1st January 2016 with a team of seven professionals of recognized expertise and still evolving, has been appointed tax advisor of the new group Banijay.

The tax firm Foglia & Partners, with a team composed of Giuliano Foglia, Matteo Carfagnini and Sara Paparella, will deal with the Italian tax aspects related to the reorganization of Italian activities of the group resulting from the merger.
The new group Banjay was born from the merger between the TV production company Banijay and Zodiak Media Group and, with a turnover of approximately $1 billion, the Group is now the fourth player in the global industry and the world’s first independent production and distribution company.
The merger between Banjay and Zodiak was announced in July 2015 with the conclusion of the terms to join catalogues and productive units of the two companies, completed on 23rd February after the merger has been approved by the European Commission.